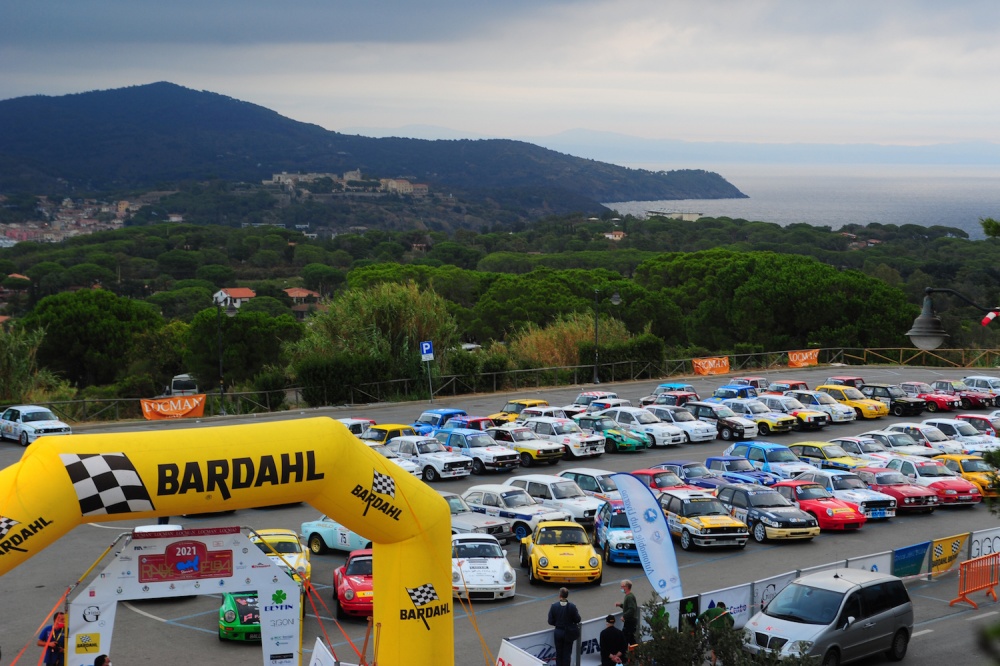 The organization feels compelled to say its thanks to all those who in various capacities took part in the event, this year more than ever, considering the great success achieved by memberships as well as with regard to the challenges on the road.

CAPOLIVERI (Isola d'Elba, Livorno), 30 September 2021 - Aci Livorno and Aci Livorno Sport, after their events, carried out with great passion and great attention to the many necessary details, this year more than ever feel obliged - evidently with joy - to thank all those who in various ways took an active part in the event, at the XXXIII Rallye Elba Storico-Trofeo Locman Italy.

“Events such as the Rallye Elba Storico - continues Luciano Fiori, president of Aci Livorno Sport - capable of attracting the participation of a very large audience, always in full compliance with the regulations related to the health situation. They are of particular importance because they also perform the function of being references to places of tourist interest and promote the image of the area through a variety of people who come to the island in various capacities, professionals, pilots, enthusiasts. An area capable of hosting major sporting events, and that of Elba seems to have been made on purpose, experiences positive economic effects in the sectors related to hospitality: hotels, restaurants, public businesses; this equation has been demonstrated over the years by our events. For years we have been convinced of the important combination of sport and tourism and in this we have the full support of local administrations. Investing in major sporting events such as rallying also means creating an important inducement, for employment as well as for hospitality and commercial activities, and this prompts us to say that we must continue decisively in this direction. This year we had the presence of participants from over ten foreign nations, the economic effects on the territory arrived from the Rallye Elba Storico were about 5 million euros, the multiplier effect of sport is therefore demonstrated and, moreover, those who arrive in a place for sport, then he often comes back to himself, let alone in a magical place like the island of Elba ”.

First of all, thanks to those who joined the challenge, to the drivers and teams, who are the main users of the race, their response, in all categories, was important, numerous and also qualified. The success of the rallye therefore passed from their presence. A presence that confirms the excellent relationship that the organization has with all those who have once again challenged the island's roads, a certainly endless love and an unparalleled esteem.

Thanks also to the competitors who took part in the two regularity races, a presence that year after year becomes ever wider at the event, and which certainly brings added value to the competition. For them there will always be a wide reception so that the Elban appointment of the two specialties can be increasingly considered as indispensable in the context of the season.

Certainly, thanks go to the territory, to the Elban community, to local administrations, to all citizens, to economic operators and to the hospitality sector that certainly benefited from it, with the arrival on the island of thousands of people, many of whom from over ten countries. also from outside Europe, but who also responded as best as possible, making the stay on Elba as usual unforgettable. Thanks also to all citizens, who have again "endured", but also supported, in some ways, the peaceful invasion of rally drivers on their island.

Thanks to the Police, with whom there has been confirmed an excellent relationship of collaboration. Both sides understood the needs of others, on the one hand those of such an important, invasive and structured event and on the other the difficulties of public order and security. There was dialogue, there was openness and for this reason the three days of rallye were able to go as well as possible.

Thanks to the race officials, the stewards, the timekeepers. Thanks to their passion but above all to their sense of responsibility and to the many sacrifices that also in this edition have undertaken so that the rallye could have its regular development. A priceless, impressive commitment, without which the race would not have been able to run smoothly.

Thanks to the impressive organized health service, this year's edition was also able to count on a great deal of work, among the obvious and increased difficulties given by the persistent epidemiological emergency.
Thanks to the Race Direction, always attentive and able to receive every minimum sign of need from everyone, drivers, teams, citizens, a not easy task, aimed above all at the active and passive safety of all.

Thanks to ACI SPORT Federation and also to the FIA ​​- International Automobile Federation. From both institutions the race has seen confirmed appreciation for the work done and for the value it has given to the continental and tricolor championships. Their support work alongside the organization was important as usual, we would say decisive.

Thanks to the press. This year has given a strong input of interest to the rally both in terms of print and web and also social platforms.

Thanks to the sponsors and partners of the race. Without their support it would not be possible to bear the ever-increasing costs of organization. Aci Livorno and Aci Livorno Sport hope to give them real repayment with a wide media visibility as well as with the fact that they have received wide acclaim for the match. Certainly this will be an important synonym to feel an active part of a project. A project that always and in any case looks far.

Finally, thanks to Elio Niccolai. He hasn't been with us since last May, but he was still around for the race. The absence of him was perceived as much as it was also imagined to see him from one moment to the next in him always of him. His advice, his teachings and visions of him have been carried out as best as possible, those that have brought the event up to now, both this "historical" and it will also be for the "modern". And thanks to him that will never end, with the promise that everything he initiated, promoted and made to grow will have a long life.

There has also been criticism. Certainly well accepted and metabolized in order to give the race new growth stimuli. As for the conduct of the special stages, we tried as best as possible to be able to run all the tests, which with a long caravan like this year was very difficult.
Expressions of disappointment were received regarding the award ceremonies, the methods and performance of them.
It should be noted that in the meantime the beautiful ceremonies that everyone was used to until 2019, for now, with the health emergency still in place, are not possible. Both as a location and as an event. There are in fact strict federal protocols to be followed. To be followed in "normal" conditions, let alone with the rules that regulate the development having to follow a health protocol for the prevention of infections.

Last year the race was already among the few in Italy to take place, also acting as a "guide" for others precisely under the preventive health aspect and the only one in a European championship that then did not see the light. Therefore, if there have been or detected dystonia or expectations have been disregarded, unfortunately this did not happen by the will of the organization but due to having to scrupulously follow the rules dictated by the protocols in force.

Having said all that, thanks again for everything done by everyone. The appointment is for a 2022 which it is hoped will be even more sunny.