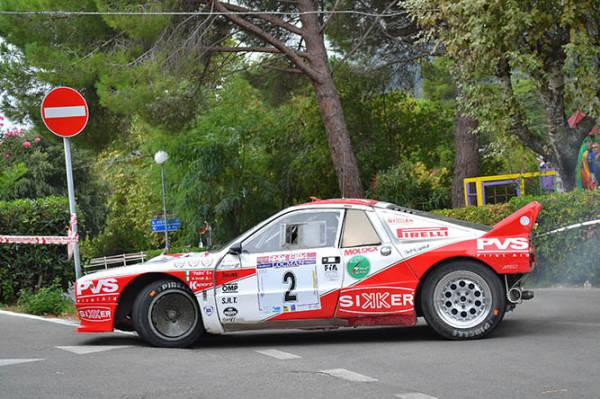 Ready to start the engines a new, exciting edition of the Elban race, valid for the European and Italian Historic Rally Championship, while the "Elba Graffiti" celebrates 25 years with the novelty of the eligibility for FIA Regularity Rally Trophy.
At the start of the elite European rally and flag of specialty historic rally, which promises three days of unique sensations.
Crews coming from ten different countries.

The XXIV Rallye Elba Storico - Trofeo Locman Italy confirms what his past says. Just on the basis its history comes the confirmation of the perception that the name "Rallye Elba" continues to have at him that runneth, as well as between professionals and fans.
Just who runs it was confirmed that the organization hoped, a plateau of rich members of drivers and cars name, consisting of 100 crews for the traditional rally and 21 for the "Graffiti", synonymous with a renovated, great affection for a race that has made history in world motorsports.
Planned again based in Capoliveri, this weekend, September 20 to 22, organized by the Automobile Club Livorno through its "operational arm" ACI Livorno Sport, the XXIV Rallye Elba Storico-
Trofeo Locman Italy is the most titled car race in Tuscany and one of the most renewed in the landscape continental of street racing and is preparing to start the engines and then give away the challenges with another edition of success.
A new edition also characterized by the presence of riders from ten different countries, among which the most distant comes from Canada.
This year 2012, also will celebrate twenty-five years of the famous "Graffiti", the regularity race
born a year before the rally that for this important anniversary grabbed an international eligibility
very important, around which was perceived a strong general interest.

THREE VALIDITY ´OFFICIAL TWO "INTERNATIONAL" TO CELEBRATE THE WEDDING SILVER "GRAFFITI"
The XXIV Rallye Elba Storico - Trofeo Locman Italy will be the tenth round of the twelve of the FIA European Rally Championship Historical and having been canceled the Rally of Mugello Stradale will also be the final act of the Italian Rally Championship. This year, as previously noted, the validity officers will be three. The perfect number. In those Championships European and Italian Historic Rally, is accompanied by the third year, a real "must" that is associated with the "Graffiti". After the experiment of 2011 asked specifically by the F.IA. to arrange a regularity rally, in fact this year, on the occasion of his 25th edition, the Graffiti (born a year before the Rally Elba Storico) will be the seventh round of the 11 scheduled for the European Trophy.
This specialty is an evolution of classical regularity, certainly with more agonism.
The rankings are determined based on the performance of the competitors on the regularity test sections where wins who is more accurate in respect of the hourly averages, not always equal, established from time to time by the organizers, which will arrange even surprise checks along the route.

THE REASONS FOR SPORTS
At Elba Island Italian drivers are the majority in the entry list. In an exclusive and very charming location, the memory of one of the most famous Italian races in the world, 2012 edition of the Rallye Elba Storico plays a role capital for the national championship title, since it becomes the last event of the series after the announcement of the cancellation of the Rally del Mugello Stradale. We have to not forget that this year is the third challenge between the protagonists of National and "foreigners" of European Championship: many duels are then announced at a high technical level, the ideal continuation of a comparison which in recent years has always won by the Italians.
The Queen of the cars will always be the Porsche. Are many, the coupe of Mercedes-Benz, which will be seen opposite the Opel Kadett GTE Group 2, the Ford Escort RS MK1, then there will be the Opel Ascona 400, the BMW, the Fulvia Hf, the Renault Alpine A110, Renault 5 Turbo and the Audi Quattro Group 4, as well as the Lancia Rally 037, which already last year was the car that won the overall classification with the San Marino Bianchini and this year a new book with laurel from Brescia "Pedro", in the odor of title.
Back to the noble Sicilian Salvatore "Totò" Riolo, who runs the charts Tricolori, but catalyze
attention to be driving an Audi, then there will be Lucio Da Zanche unfortunate in the
last test run in Friuli, who will sew the suit their second championship in a row, and finally to speak
the presence of the much more pleasant Alberto Salvini also called him to make up for the bad luck suffered the Rally Alpi Orientali earlier this month, not to mention another "name" as that of Raoul Marco Domenicali (Porsche 911) and Pierangelo Rossi, with a Renault 5 Turbo. To be followed with interest the performance of Andrea Zivian (with an Audi Quattro), driver in the "modern" often gave evidence of great quality.

THE CHALLENGE OF CONTINENTAL IS CELEBRATED ON THE ISLAND
For the EHSRC, in the first category, Parisi, leader by a wide margin is not entered in the rally, so the focus will be on duels offered by Maurizio Pagella (Porsche 911), the Canadian Owen (Alfa Romeo 2600 Sprint), as well that the Luigi Capsoni (Alpine A110) and Luigi Zampaglione (Porsche 911), paired in ranked fourth place, ready to duel then firmly.
In the second Category, spotlight on Graziano Muccioli (Porsche 911), Pietro Corredig (with the BMW 2002 - the last winner of the Trofeo Abarth A112 in 1984) and Enrico Brazzoli (Porsche 911). Lacking the leader, Swedish Myrsell - firmly in command - his deputy Antonio Sainz and also ceko Janota, have the opportunity to progress in concrete in the standings.
The Third Group announces a duel on between Brescia Roberto Montini (Porsche 911) and English Cunningham (Ford Escort), separated by only nine points behind the championship leader Ernst Harrach (absent here) and also Roberto Onofri (VW Golf GTI) will seek to increase scoring Ranked taking advantage of the Spanish Albos and Aboitiz.
The biker "Pedro", fresh from winning the Rally Eastern Alps and the Norwegian Walter Jensen in the Fourth Group will try to repeat the success of 2011 with their Lancia 037. Then produce a unique and a "music" of cylinders of rare beauty, however, opposed to the various Porsche performance at the start.

A MASS OF TROPHIES
A location so unique, so fascinating a path that can not attract the attention of all-round world of historic rallies. For this for this year will be able to appreciate the way of the XXIV Rally Elba Storico some trophies, which will certainly be capable of supporting the event itself. There are the A112 Trophy Abarth, the Trofeo "the Queen", dedicated to Lancia Fulvia HF, the Trofeo Fiat 127, in addition to the Challenge Rally Autostoriche 2012 and Italy to the Challenge 2012.

THE ROUTE: COME THE "PARADE-Volterraio" AND THE "HILL-THE BATTERY"
Still three days of competition, with a scheduled departure from Capoliveri at 20.00 on Thursday 20 September. Competitors will face once the novelty of the first two thousand and twelve, the "Parade-Volterraio" (14.260 km), two names "Piesse" which alone are already linked to the myth and that together they will. . . great things. It ´a new version, that will certainly be appreciated by lovers of the race Elba. Wire up to Rio nell´Elba for address the "Parade" and from there it faces the "Volterraio" in the direction of stores, admiring, in down, the Gulf of Portoferraio. The other novelty is the introduction of "Poggio-La Pila" (Km 15.500), practically the "Two Seas" in a race version up to the eighties, with the passage in the town of St. Hilary and characterized from the end with some spectacular hairpin bends down.

CONFIRMED LOGISTICS INTERNATIONAL HOTEL ELBA CAPOLIVERI
Nothing changed, compared to 2011, with regard to the logistics of the rally, the Headquarters event will remain in Capoliveri, functional structures at the Hotel Elba International, exclusive location that admire the Gulf of Porto Azzurro, which will host the Race Direction, the Secretariat and the Press.
This year, then, the hotel will be even more integral part of the race, ospitandone a reorganization, scheduled for Thursday 20 after the first special stage, to 22.22.

PARTNERS: TOGETHER TO RACE WITH PASSION
Locman Italy, Moby Spa, Capoliveri, Eni, Ip, Water Elbe and of course the Automobile Club Livorno for the 2012 edition of the race will be at the side of the organization confirming their strong passion for sports car and especially for the Rallye Elba. Also notable is the collaboration with the Rio nell´Elba, whose administration has once again demonstrated sensitivity to the event understood as inseparable from its territory, collaborating again with the Organizing Committee so that the event can have the importance it deserves by the "Piesse" drawn in your area.